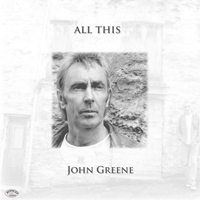 After Gone West was released the Lost Cherries continued to gig and as well as using songs from the album we started to include other covers and some of my own work. 'Karma' and 'She don't Care about Time' were 2 of the covers. 'Running' and 'Round and Round' were mine.

In the spring of 1995 the Lost Cherries were truly lost, as art students became artistes and moved to Derrero fame.
I returned to bass playing in a soul band and momentum was temporarily gone until I started playing in a local jam night.
The drummer was the late great Colin Snell and other players included Matt Exelby, Helm DeVegas and Jimmy Cannon, all then of Wonderland, soon to become Naked Sushi.
I eventually realized an album could be made if I had enough songs.

The 4 songs mentioned above provided the starting point and these were augmented by 2 others of mine from the same era (1983) and one even earlier (Mexico) which I wrote in California in 1976.
As luck would have it I was approaching a significant birthday and as angst flowed freely from my pen 4 more songs were written over the winter of 97/98.

Work commenced in April of 1998 and the drum tracks were laid down to the band playing live in the studio; 10 tracks in 2 days was an awesome effort on Colin's part and we were all lucky to survive.

Recording continued throughout the summer in an atmosphere of creativity and chaos and final mixing resulted in a release date coinciding with my birthday and a massive gig/party marked the event.

We were all lucky etc etc etc

01 Round and Round
As mentioned above, this song was written back in 1983 and reflects on the circular nature of argument (presumably with my wife of the time)

02 She Don't Care About Time
The first of the Lost Cherries live favourites, this song was written for the Byrds by Gene Clarke in 1965 and our version features wicked slide from Matt Exelby, and crunch rhythm from me. Awesome BV's from Matt and Helm. The recording of BV's by these two throughout the album provided us with more hilarity than I can convey. The outtakes still exist. You have been warned!

03 Tap
One of the last songs to be written, this was inspired by a night when I was playing a gig and watching a girl I liked getting off with someone else. Not recommended. Jazz waltz lifted by inspired saxophones from Jimmy Cannon.

04 Mexico
The oldest of my songs on the album, as mentioned above, this was written in California in 1976 and tells of an incredibly drunken trip I made to Tijuana with a band I was working for at the time. (Oh alright then, it was the Tubes) Standout trumpet by Rhythm Doctors ace Jerri Hart

05 All This
Another of the 97 output sees me dreaming of what might be. But, of course, things turned out differently as they often do. (See Tap)

06 Running
Written in 1982 and often gigged by various of my bands I waited a long time for a satisfying recorded version. This is me and Colin! The Cherries played it properly in rehearsal once but, of course, no tape was rolling !!

07 Can't Stay
Back to 1983 and it's pretty obvious what's going on here. Floydian in Extremis.

08 I Don't Fancy You
Once described by a reviewer as, and I quote, "a fuck-you-all, vertical projection of bile and ill will, coughed up like a dodgy kebab on to an unsuspecting public", this song vents my displeasure with a member of the opposite sex. (See Tap and All This). Backwards guitar feedback by Matt Exelby with out of world effects by engineer Jess Carter.

10 The Reflection
Last song to be written and brings to a close not only the album but also the 97 angst period as the love object disappears with her new guy. Oh well fish/sea/bicycle etc.


Matt Exelby is a Bingo Twin amongst many other things.

Helm DeVegas is a Small Wonder.

James B Cannon is a Big Band leader in London England.

Colin Snell was but now isn't and is greatly missed.

Recorded and engineered on 16 Track Studer 1" by
Jess Carter at The Bunker Studios, Cornwall during 1998